AnonymousDuckLover, commonly abbreviated as ADL, is a duck from Club Ducky, who works for the PSA. During his free time, he works as a lawyer. He is the uncle of Saruman, and owner of Quack Quack. He has an imaginary friend called Larry.

ADL is completely yellow. While what he wears changes depending on who he cosplays as, he typically wears a white shirt, with yellow sleeves, that says "I ♥ ADL" on it, a reference to the trademarked "I ♥ NY" shirt.

ADL has a personality some might label as "strange" and possibly even "immoral". He has a habit of doing things others would probably never do, such as doing experiments on other characters while they're sleeping, or giving them a random mystery liquid. ADL can also be very stubborn, much to the annoyance of others. He will oftentimes be in places, paying little attention to what is actually going on around him, and doing something unrelated, probably on an electronic device, playing a game, or watching a YouTube video.

ADL can be very violent, with his weapon of choice being a flamethrower because it covers a relatively large area in a short amount of time, while having its destructive power last longer than he'll probably be there. He may have also eaten Rookie's long lost Teddy Bear, Ted E. Bear, as it appears in a dimension based on his stomach. Rookie has also once dreamed about ADL brutally murdering him, after eating his pie, which ADL hates others doing.

ADL enjoys playing Pokémon, among other video games he plays. He enjoys solving mysteries, and has found that the Director may be Cadence. He can often be seen roleplaying as his favorite fictional characters, including Link, Dipper Pines, and a Clefairy. He also has an interest in mathematics.

He is asexual, and has no desire to reproduce. He believes that the planet is overpopulated, and the most ethical way to deal with this problem is to decrease the number of children being born. He is also atheistic: believing that no religion supports any real evidence for its claims.

Despite his various personality quirks, ADL tries to use his time productively. He tries to be helpful to his friends, though he won't help if he disagrees with what they are trying to do.

He met Melissa when she and her family came to visit them at their castle during his early life. However, he has forgotten about this encounter, and is unaware of her existence, or her crush on him.

When he grew up, he took the crown, and became the king of Club Ducky. He then banished all the moose from the island, due to his hatred towards Businesmoose, who he had unintentionally met on his journeys to Club Penguin several times. Businesmoose refused to accept ADL's friend request, and ADL plans to seek vengeance on him. As the king, ADL rewarded Vove, a famous pirate, with a shirt, and a magical coin he found when he was younger. While living in Club Ducky, ADL adopted a duckle.

Later on, he bought a cruise ship, and moved to Club Penguin, where he then joined the PSA. As a PSA agent, ADL quickly became a top agent. Shortly after moving Club Penguin, ADL met Bambadee, who gave him a tour of the island. Ever since then, the two have become friends. He currently lives on the cruise ship he came to Club Penguin on.

At some point, after moving to Club Penguin, he had created an imaginary friend called Larry. Larry has followed ADL around since his creation, but only talks to ADL when they are alone, and ADL is bored. When his nephew came to Club Penguin to live with him, he allowed him to live on his cruise ship with him. They currently live together with Quack Quack. He also created the Awesome Duck League, an agency of ducks that live in Club Penguin. Together, they fix miniscule problems on the island that nobody cares about, while being awesome.

In January 2015, he stole some top secret documents from the Illuminati, leading them to the agency to arrest him. During his time being kidnapped, he sent out messages to the PSA to exploit them, and free him. He later escaped from the Illuminati, and they Illuminati were soon defeated. These events have come to be known as The Illuminati Takeover.

ADL is studying the arts of wizardry. He has become successful in the elements of Earth and Water. One day, while practicing magic, he found a strange stone that allowed him to stop time. Upon further studies on the stone it was discovered to be a Time Gem.

ADL has made several appearances in stories on this wiki.

The Crack Made Me Do It

In The Crack Made Me Do It, ADL is a Chocolate Factory employee who follows the crackheads around, along with his imaginary friend, Larry. His main goal in this series is to stop the crackheads from selling crack, especially to other employees.

ADL has appeared as a mascot during several parties and events, including Operation: Valentine, The Waterific Summer Party, the Celebration of Pie, and The Holiday Party 2015. Additionally, he was originally intended to appear during The PSAnniversary Party 2014, but was later replaced by Helmet. During The Illuminati Takeover, he was kidnapped by the Illuminati.

In Five Night's at Herbert's, ADL was cast as Chico: a parody of Chica. 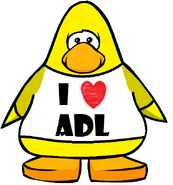 ADL's Official T
Add a photo to this gallery
Retrieved from "https://pixies-secret-agency-psa.fandom.com/wiki/ADL?oldid=74004"
Community content is available under CC-BY-SA unless otherwise noted.