Aria Adams, also known as Taco, and formerly known as Sunshade, is an astrologist and an agent of the PSA.

Aria is an outgoing and spunky agent who absolutely loves tacos, pizza and junk food in general. She is the astrologist of PSA, and is great with computers. She is hot tempered, and gets in fights easily, though she does try to restrain herself from doing so.

Aria was originally born on Earth, but soon moved to the Epic Galaxy. She 'borrowed' an invention from Gary, which was one of the best models of a rocket, to go to the Epic Galaxy in less than a day. Gary dislikes her for doing this.

The Epic Galaxy was a pretty weird place. She first moved into Tacoland, where the ground was a taco shell and the trees grew all you could find in a taco. Then, with the rocket, she flew to many other places and planets, including Potato Palace, Cyberspace, Lava Falls and a lot more places.

Once, Aria got sucked into Cyberspace with her friend Cynna. Cyberspace was basically everything related to technology. Here, she learned many tech things that helped her escape the cyber labyrinth. Although it was a pretty cool place, Aria doesn't want to return.

Aria almost died 50 times in Lava Falls. It was much hotter than she could bear. There was lava and fire everywhere. Eventually, Aria fixed her rocket that crash-landed into Lava Falls and returned to Tacoland.

After visiting different planets, Aria finally returned to Earth, where she joined the PSA. Occasionally she will leave for the Epic Galaxy and come back, but she is happy in either place. 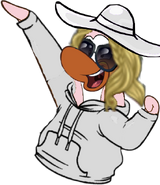 Aria in her usual outfit

Before Aria dyed her hair blonde

Aria with her hair straightened

Aria with her hair straightened while wearing her signature hat
Add a photo to this gallery
Retrieved from "https://pixies-secret-agency-psa.fandom.com/wiki/Agent_Aria?oldid=74229"
Community content is available under CC-BY-SA unless otherwise noted.