Benjamin "Benjamin8145" Arthur P. Freight is an agent of the PSA. He is part of a legendary family, which both invented, and protected the Cookake, a legendary fusion between the Legend Cookie, and the Mystic Cake. He owns a blue puffle called Oshawott.

Benjamin is a fan of cookies and cakes, and takes his family's mission of protecting the Cookake very seriously. He also like the color lime green, Legos, and the game Plants vs Zombies. He is not a huge fan of music, but he likes Daft Punk's song "Harder, Better, Faster, Stronger." 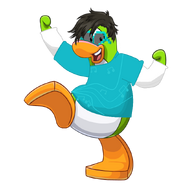 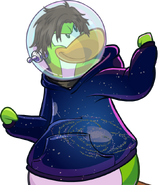 Benjamin8145 with Oshawott in-game
Add a photo to this gallery
Retrieved from "https://pixies-secret-agency-psa.fandom.com/wiki/Agent_Benjamin8145?oldid=74227"
Community content is available under CC-BY-SA unless otherwise noted.