Agent Blue Jay (refers to self as Blue Jay Superior; full name Catherine Jay Sensei) is the co-leader of stealth in the PSA. He lived in a different dimension until he was sent into our dimension by Kevin. He is Sensei's younger brother, and Sensei is technically two years older than him. He is known to have been married three times, to Belle, Dot, and Sunny respectively. He has gotten a divorce with the first two.

Like his older brother, Jay is trained as a highly-skilled ninja. He also has 7,943 siblings. The most notable are Sensei, Kevin, Harold, and Dana, the latter being his former sister. His former occupations include a puffle herder, a stage operator, a director in some plays, light house monitor, a speed boat driver, a tour guide to young penguins, a hair stylist, and the leader of Club Penguin. He would have been the leader of Club Penguin for a longer time, but he didn't because a Smulley from an alternate universe had a device to make his wishes come true, and he wished that he was the leader of Club Penguin.

He was once killed by Kevin, but found his body later. After that, he supposedly became a cyborg for Kevin, but was actually an undercover agent. He had become Red Jay even after that, but it was later revealed that it was a disguise because he felt unappreciated.

Jay's true age is 340, although he looks like a 22-year-old. This is because of a side effect that remained after Herbert used a device that turned the PSA into puffles, which they later got out of. Because of this, he doesn't actually know if he is 340 or 22, although he goes with the latter.

Jay has had many children, including Jedi, Puffles, and JPG with Belle, none with Dot, and most recently, twins Aura and Link with Sunny.

Blue Jay in a suit 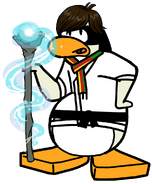