Violet Marina Dojour/Aquila Frollo, better known by her agent name, Agent Brohoof, is a PSA agent, and a fashion designer. She is of Indian and Roman origin, and is descended from Night and Death.

Violet loves chocolate, pizza, and ponies, owning a dark chocolate crown which she dubbed the 'Chocolate Crown'. She is into science, history, and technology. She has herpetophobia, the fear of reptiles (mostly snakes and lizards). She believes Jet Pack Guy is too serious, and overrated. She gets seasick easily.

Violet was born on a cold winter night, and was the much awaited and intelligent first child of the family. In her early school years, she was good in her studies, but paid more attention to science and history than other subjects. She graduated from Club Penguin University, and has been working as a writer since, as an undercover job. Working in the PSA is her real job. She married Petey K after meeting him at one of his concerts. Soon after their marriage they had a pookie together named Ava. However, after a fight, they got divorced and she left for the USA with her daughter, where she worked as a fashion designer. There she met Leo Valdez, who became her boyfriend. She renamed herself Rowena Stafford and returned to Club Penguin. As of May 23rd, 2015, it was confirmed they were engaged.

Violet can control electricity and anything related to it, one time using it to shut down Gary's equipment. She is also intelligent, having invented the Hairinator and Colourinator, two inventions which can change the colour of a penguin's hair and colour with the click of a button. She is also a great fashion designer, being good with hair stles in particular. 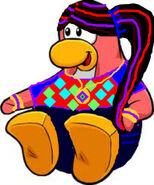 Her casual outfit (old)
Add a photo to this gallery
Retrieved from "https://pixies-secret-agency-psa.fandom.com/wiki/Agent_Brohoof?oldid=74224"
Community content is available under CC-BY-SA unless otherwise noted.