Agent Jim "Helmet" Baker is one of the founding members at the PSA who helps Pixie, as well as the other agents, and is also the assistant commander. He is married to Paige, and the father of their child, Darwin. He is also the adoptive father of Charlie, and the owner of Pluffy.

Helmet loves donuts as much as he loves his wife. He thinks jet packs are cool, and wears one most of the time, like Jet Pack Guy. He absolutely hates Cadence, to the point where he is actually immune to anything that would force him to like her, and has classified her as an unnamed species without a gender.

Helmet was one of the founding agents of the PSA. He fell in love with Paige, and together, they had one pookie, and adopted two more. Prior to The Gary Takeover, Gary tested his cloning machine on him, and created Not Helmet. 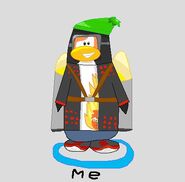 Retrieved from "https://pixies-secret-agency-psa.fandom.com/wiki/Agent_Helmet?oldid=74209"
Community content is available under CC-BY-SA unless otherwise noted.