Agent Lillian "Lily/Lilly" Somerville Sensei is the sibling of Gary, Katy, and Jeremy, and the half-sibling of Rockhopper. She is currently married to Agent Puffles. She loves sweets, especially lollipops. Gary then gave her the nickname "Lily the Lollipop Gal." She was deceased, but a mission back in time caused her to remain alive. She is currently a PSA agent.

Lily was born on a little island to the south of the Lighthouse. Gary cared a lot about his little sister, and even if he was incredibly shy, he stood up for her when she got put down. Even though her two eldest siblings, Katy and Jeremy weren't always around because they were busy with "adult things", they tried to visit when they could.

Agent Puffles met her at a local amusement park near a sweets stand. Lily noticed his jet pack and was really fascinated by it. They had a secret relationship, and Puffles even got her a jet pack on Lily's birthday.

She was once part of the SIPL, Special Intelligent Penguins League (pronounced siple) along with Puffles and Agent 380. On a mission near Dinosaur Island, she was trapped in falling rocks. One of the rampaging dinosaurs came to attack her, but luckily Puffles managed to save her. 380 was assigned to shoot down that dinosaur, since it had injured a lot of agents. However, a nearby Pterodactyl screamed as he was aiming. 380 then lost aim of the dinosaur and shot Lily on accident, causing her death.

However, Jay accidentally sent Puffles back in time, where he saved Lily and defeated the Pterodactyl, making her alive again. She forgave 380 for what he did, but hates him again for betraying the PSA. 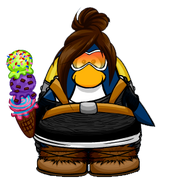 Lily with her jet pack on.

Lily in a dress.

Lily being excited
Add a photo to this gallery
Retrieved from "https://pixies-secret-agency-psa.fandom.com/wiki/Agent_Lily?oldid=74878"
Community content is available under CC-BY-SA unless otherwise noted.