Agent LookatmeIgotaKey, aka Agent 173, was an agent working for the the PSA. He seemed to be an amazing spy and has home-made stealth gear.

Agent 173 is disgusted by cake, and prefers pie, going as far as to create a new flavor, Key flavored. He is also terrible with puffles, and even tried to kill Wingman once. Secretly, Agent 173 is a sith lord, but never shows his anger or hatred towards agents of the PSA. He has went as far as to refuse to battle Jedi.

When Agent Lookatme was just born, his parents disappeared when a huge monster attacked. They were never heard from. He had to teach himself everything, he wasn't aware that Rookie was his brother, calling him a odd outcast.As he grew, he grew rougher and rougher. Soon, he would become a loner and then, a spy for hire. He decoded, disguised and took the target, then received his reward. The PSA was aware about Lookatme and his amazing spy skills. Rookie, now older but not much more common sense and intelligence, recognizing him. He was later recruited, and now a member of the Stealth Division.

As of January 6, 2014, he has officially retired from being an agent. 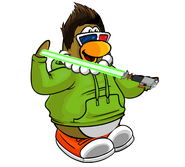 Agent Lookatme's public uniform
Add a photo to this gallery
Retrieved from "https://pixies-secret-agency-psa.fandom.com/wiki/Agent_LookatmeIgotaKey?oldid=74223"
Community content is available under CC-BY-SA unless otherwise noted.