Noah Dan Ell is a member of the PSA, and is currently low-ranked. He accidentally discovered the PSA when trying to find a new igloo. Before joining, Noah always loved wandering about and shopping. Now that he is in the PSA, he has given up on shopping sprees. Noah grew up on a lone iceberg with no parents, but his "home" drifted towards Club Penguin.

Noah is a homosexual, and has a crush, but he has never told anyone who it is.

Noah is crazy and smart (even though he disagrees), but hardly ever shows his crazy side. He can be funny at times and is normally quite calm.

Noah first opened his eyes on a floating iceberg, alone, and far away from anybody else. His young self adapted to the situation, and taught himself skills, such as catching fish and taking long naps (his favourite). One random day, his small housing drifted towards Club Penguin. He started to meet a lot of people, and started a small job at the Coffee Shop, and then bought one of his, now,  many igloos. He then stumbled upon the PSA when trying to expand his wide collection of igloos. He didn't really know what he was signing up to then, and doesn't know now either. 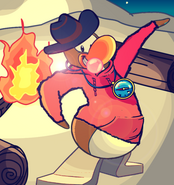 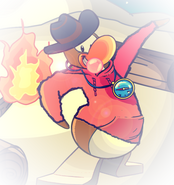 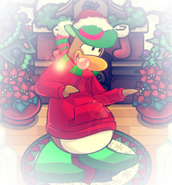 Noah talking to someone

Add a photo to this gallery
Retrieved from "https://pixies-secret-agency-psa.fandom.com/wiki/Agent_Noah?oldid=75456"
Community content is available under CC-BY-SA unless otherwise noted.