Agent Puffles, otherwise known as Agent 206, and Timothy, is an agent in the PSA and EPF, as well as the disbanded agency, SIPL. Puffles' rainbow puffle, Firework, is the first of his species to join the PSA/EPF. Firework sometimes helps Puffles with missions but usually stays at HQ or at Puffles' igloo.

He is married to Lily, and the father of their two children, Ayanna and Raiden.

Puffles is the younger brother of Jet Pack Guy. Their parents got separated from them a few years ago. Herbert had captured penguins and held them hostage on the iceberg. A chunk of the berg was accidentally cut off with Puffles' parents on it. This caused him and JPG to deeply hate Herbert.

It was later found out that this was an artificial memory created by Admiral Percy Jammington XXVI. In reality, Puffles got kidnapped and JPG was sent to find him. They never returned, leaving Belle and Jay heartbroken. Percy later renamed the two into their current names: Puffles and Guy. (Previously, Puffles was known as Timothy, and Guy was known as Hunter). Many years later, Puffles along with his brother escaped from Percy and joined the PSA. Jay didn't recognize his children at first, since they were a lot older. However, when they went back into the future, Jay found out that they were his long lost sons, using a device he found.

During a mission with 380 and Lily when they were in the SIPL, 380 inadvertently killed Lily. Puffles hated 380 after this. The agency disbanded soon after. Lily remained dead, until a time change caused her to survive the accident.

Puffles is very adventurous and likes being social, unlike his older brother. His main interests are music and art. He loves jet packs and tries not to do anything without one. JPG has told them that, "Rookie is like part of the family." Puffles still thinks he should have more privileges than Rookie because of Rookie's naive nature.

He is extremely scared of cats, bugs, and spiders. 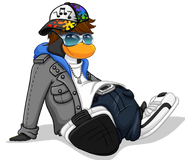 His casual outfit.
Add a photo to this gallery
Retrieved from "https://pixies-secret-agency-psa.fandom.com/wiki/Agent_Puffles?oldid=66191"
Community content is available under CC-BY-SA unless otherwise noted.