Rafael was a ghost that died in a secret room in Locy's house, before finding his soul and reviving.

Rafael is the son of Cece Jones and Seacat. He was always living in Innocent Island because it was perfect for his family. He always surfed and always got better. He was also a skilled guitar player. It was also on Innocent Island when he met his girlfriend, Lola. When he moved to Club Penguin Isle, she was heartbroken. He brought along his puffle, Hungry. After being on Club Penguin Isle, he joined the PSA. He was sent on a mission to Locy's Library but was trapped, lost his body, and became a ghost.

Now, Rafe has found his body after the long mission in Locy's Library, and is living a normal life.

Rafe has currently 2 puffles: an orange one and a blue one. The orange one is called Hungry, since he's always hungry. The blue one is Lotus. who is still on Innocent Island. Hungry is in Rafe's apartment. 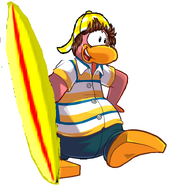 Rafael and Lola dancing in the Inno-Club 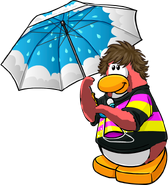 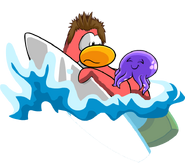 Rafe getting creeped out by a spuid on his butt

Rafe happy for getting the job of Lifeguard! 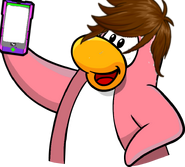 #SELFIE!!
Add a photo to this gallery
Retrieved from "https://pixies-secret-agency-psa.fandom.com/wiki/Agent_Rafael_Pengi?oldid=74221"
Community content is available under CC-BY-SA unless otherwise noted.