Barry James Fisher was the former neighbour of Dylan and Paige. He is currently Dylan's best friend.

Barry has yellow feathers and short hair that is naturally brown, but has dyed it to a bluey-purple. His main apparel consists of a black leather jacket, a maroon t-shirt underneath, jeans, and black converse.

Barry is easy-going and carefree. His happy-go-lucky personality is what led him to meet his white puffle, Snowy. He is also a huge fan of music.

Barry was born in early 1986 as the penultimate child of Ray and Maya Fisher. In his youth, he became best friends with neighbour and later brother-in-law Dylan. He was also on good terms with Dylan's sister, Paige.

Barry was always close with his elder sister Mae, both sharing the same love for music, and regularly goes to watch her gigs at the Dance Club. When parties come by, Barry usually helps out with the decorating of the Dance Club.

One day, at the construction of the Dance Club for a party, Barry met Stacey. They talked for a bit, and agreed to meet up again at the Pizza Parlour. After their date, they exchanged numbers. A few days later they crossed paths again at Dylan and Kate's wedding. They continued dating after that for several months, meeting each other's families. Barry proposed to Stacey in the Forest, and she said yes. They got married the following spring.

Unlike his wife, Barry did not attend Sherbert's Birth.

Bilingual: Barry can speak Penguin Speak as well as the Puffle Language. 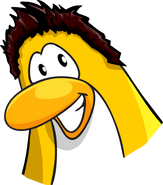 A headshot of him before he dyed his hair. 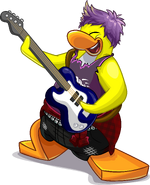 Barry playing some tunes on his bass guitar.
Add a photo to this gallery
Retrieved from "https://pixies-secret-agency-psa.fandom.com/wiki/Barry?oldid=75290"
Community content is available under CC-BY-SA unless otherwise noted.