Braighdeigh is a mysterious and idiotic penguin who works for the RPF. On several occasions he has tried to capture McKenzie and Gizmo as a trap for him to kill his arch enemy, Charlie.

Brady, being hypnotized, and under control of the RPF, will do anything they want him to do. Gary has predicted the hypnotism won't last forever, though it is possible he is wrong. Along with this, Brady has been shown to be pathetic. He has never gotten any kind of education, or even fully matured, and as a result, has not done anything worthwhile with his life. Along with this, he'll suck up to anyone, including Herbert, who he calls "Boss," just to make a friend. He has even gone as far as to pay others to be his friend.

Brady, along with McKenzie was created as a temporary mascot for Club Penguin's Teen Beach Movie Summer Jam. He is based on a character in that movie of the same name. Once the party was over, Brady was hypnotized by Tusk and joined the RPF. He was ordered to kill McKenzie for unknown reasons, but Charlie arrived at the last minute and arrested him. One month later he broke out of prison and has not been seen since. 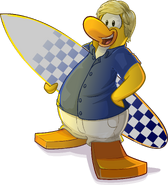 Brady with his surfboard.

When he captured Tra for the second time.

Cutout of him capturing Tra 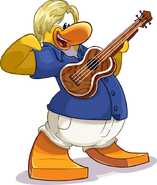 Brady playing the ukulele.
Add a photo to this gallery
Retrieved from "https://pixies-secret-agency-psa.fandom.com/wiki/Brady?oldid=75389"
Community content is available under CC-BY-SA unless otherwise noted.