Budder Ninja is an RPF agent and the creator of Card Jitsu Butter. His worst enemy is Sensei.

Budder Ninja loved butter. He loved it so much that he made Card Jitsu Butter, and mastered it. When he pitched his idea to Sensei, he thought it was ridiculous. It made Budder Ninja so mad that he turned evil and used his Card Jitsu Butter for evil. He joined the RPF soon after. 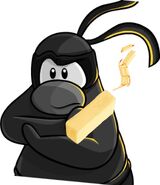 When the full power of CJ butter is unleashed
Add a photo to this gallery
Retrieved from "https://pixies-secret-agency-psa.fandom.com/wiki/Budder_Ninja?oldid=74654"
Community content is available under CC-BY-SA unless otherwise noted.