Cadence is an agent of the PSA, a DJ, a singer, dancer, and popular musical artist in Club Penguin, despite most people hating her. She first appeared in the Club Penguin Times when there was a tour about the Dance Club. Her favourite phrase is, "It's time to dance!". She likes to call herself the "Dance Machine". She also owns a purple puffle named Lolz.

Cadence is known as a girly girl, acting like an average teenager. She's illiterate, using slangs and acronyms, and doesn't seem to notice that most people hate her. She claims she has many friends, being extremely sociable and friendly, but most of them were forced to be her friends. She's obsessed with fashion, music, dancing, and singing.

Cadence first became famous in January of 2009, and has since become a celebrity in Club Penguin. She used her fame and fortune to join the PSA, and some connections with a few of the agents, to join the agency. Since joining the agency, she has been killed and revived several times.

Cadence has dated Lego Here, Kris, and Eagles. She married Eagles, but they got divorced for an unknown reason. Eagles' new wife, Megg, killed Cadence in fear of her stealing back Eagles. After her revival, Cadence still showed interest in Eagles, before ultimately giving up. Cadence is pansexual, but mostly swings towards men. However, she has started dating Dot.

Her brother Phineas99 hates the fact that Cadence liked Lego Here in middle school. The reason is because Lego ate all the pie in his store, Peng-Mart, making him lose confidence in Lego Here.

Cadence has died several times over the course of the PSA's founding, only to be resurrected by multiple people including Jay, ADL, and Gary. 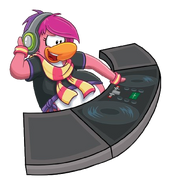 Add a photo to this gallery
Retrieved from "https://pixies-secret-agency-psa.fandom.com/wiki/Cadence?oldid=74274"
Community content is available under CC-BY-SA unless otherwise noted.