Clarisse is an agent of the PSA. She is also the last female Frost Bite.

Clarisse is the last female Frost Bite in the entire world of Club Penguin. She loves to ice skate ever since she found an abandoned ice skating rink. One day, Jay and Adam were sent on a mission together when Gary found paranormal readings behind Ski Hill. The rink happened to be behind Ski Hill, and they both found Clarisse. She was later recruited to the agency.

Clarisse has standard Frostbite powers such as creating frozen snowballs, and walking on Ice without slipping. She can also make it snow at anytime, and travel through snow by turning into snow, and reforming from snow in another place. 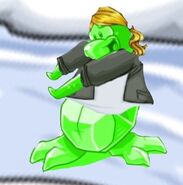 Her Playercard at The Shamrock War of St. Patrick's Day 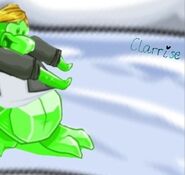 Her Giveaway at The Shamrock War of St. Patrick's Day 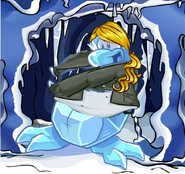 Her Playercard at The Holiday Party 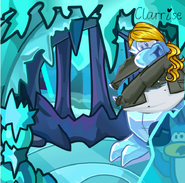 Her Giveaway at The Holiday Party
Add a photo to this gallery
Retrieved from "https://pixies-secret-agency-psa.fandom.com/wiki/Clarisse?oldid=74855"
Community content is available under CC-BY-SA unless otherwise noted.