Cody Shane Johnson is a member of the PSA as well as the best friend of Tra, being close with his ex-boyfriend, Patrick. Cody nearly died due to hatching too late. He owns a red puffle named Berry.

Cody's personality is described as "strange". He enjoys stuffed animals and is obsessed with Rockhopper and his tales. He has a good sense of humor and makes people laugh quite often. He is bisexual and is shown to have feelings for Jamie and Tra, he used to like Jamie more, but his feelings for Tra have since grown a lot more and now likes him more than Jamie. His favorite song is Left Standing by Shane Harte.

When born, Cody nearly suffered and almost stopped breathing due to hatching later then he was supposed to. He was later saved from nearly dying by Gary the Gadget Guy who was a doctor at the time and managed to save him. Growing up over the years, he has not told anyone this story. Cody later met Tra during 1st grade and they have been best friends ever since. After joining the PSA and after freeing himself from the wrath of Herbert P. Bear, Tra showed Cody the HQ and asked The Director if he could join, she directly responded: "The more the better, of course he can join. Welcome to the agency!". Cody now fulfills his duties as an agent of the PSA. 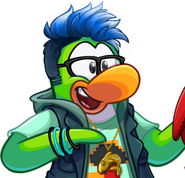 The icon for "Ask Cody" in the PSA Times 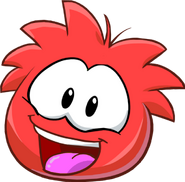 His puffle, Berry. Unlike most red puffles, his tongue is pink rather than orange.
Add a photo to this gallery
Retrieved from "https://pixies-secret-agency-psa.fandom.com/wiki/Cody?oldid=75440"
Community content is available under CC-BY-SA unless otherwise noted.