Agent Cristina Lamb is Amanda's wife, and a PSA Agent. Amanda taught her skills to become an agent. She joined on December 31, 2015. She and Amanda live together, and own three puffles, a zebra puffle named Isabella, and a hot pink puffle named Pinky. When she moved in with Amanda, she brought in her magenta puffle, Goofball. Her puffle is named Goofball because he likes to jump around. Isabella and Pinky didn't like Goofball at first, because they thought he was too obnoxious, but now they are friendly towards him. Her birthday is January 16.

Cristina likes rock music, and many types of punk music, especially punk pop. She likes shopping for clothes and decorating her and Amanda's igloo. She also is greatly devoted to her puffles and Natalia, and spoils them, buying them several toys and treats. She is bisexual, usually dating women.

Cristina was born and raised in Scotland. She moved to Club Penguin at 18. She began working as a waitress at a restaurant at 19, for college credit. In 2011, she met Amanda, who had gone to eat there, when she was serving her her food. Amanda felt attracted to her, and began going to the restaurant regularly. They became friends, and Cristina eventually realized her feelings for Amanda. They began dating in 2015. Cristina graduated college, and still works at the restaurant, part time. She and Amanda often go there on dates. They got married on December 28, 2015, and adopted Natalia in 2016. 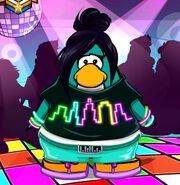 Cristina at the night club
Add a photo to this gallery
Retrieved from "https://pixies-secret-agency-psa.fandom.com/wiki/Cristina?oldid=69891"
Community content is available under CC-BY-SA unless otherwise noted.