Franky was a penguin band member, being the lead singer and playing the keyboard. He, along with the others, secretly worked for the PSA. Just like Brady, he never lost his pookie feathers. He was very close friends with Cadence, which made Stompin' Bob jealous because he liked her before getting over it. Franky was completely oblivious to this.

Gracie sniped him by Pixie's request. This may have been because Pixie hated Franky for killing her goldfish and breaking her computer. After his death, the Penguin Band disbanded. 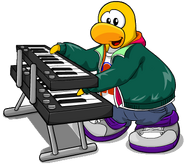 Franky and his keyboard.
Add a photo to this gallery
Retrieved from "https://pixies-secret-agency-psa.fandom.com/wiki/Franky?oldid=73901"
Community content is available under CC-BY-SA unless otherwise noted.