Uhh oh...
You may be looking for something else.
Try Gary (Disambiguation).

Gary Somerville (real name Gariwald Somerville IX) is the lead inventor and scientist for the PSA and EPF, a somewhat successful television actor, and the current keyboardist and occasional vocalist for the nerd rock band "Aliens & Stuff".

He is the husband of Pixie, and the father of their child Zelda. Most of the technology used by the PSA was created by Gary. He has an addiction to caffeine, which causes Pixie to worry for his health. Agent Brohoof is currently working on a way to stop his addiction.

He is friends with The Doctor, whom he met while travelling in the Time Trekker. He is known to help Gary with improving his Time Trekker.

Gary is quiet and imaginative, although he has been know to be quite talkative at times. Although he tries to act brave around his fellow agents, he is actually quite the coward, and is very easily frightened. Despite this, his favorite film is Night of the Living Sled, which he has watched a countless number of times. He hates his wife's nickname for him, "Gary Bear," which often causes others mistake him as a bear when he's not around.

As a young adult, Gary worked as the main inventor at the Penguin Secret Agency. In this position, Gary was one of the first agents a new recruit would meet. Gary also worked as the top Technology Specialist for the Elite Penguin Force. When Herbert destroyed the PSA's HQ, many agents who worked for the PSA started working for the EPF. One of these agents, Pixie, began to work as an apprentice to Gary. Gary had been oblivious to Pixie's feelings for him, until Operation: Blackout occurred, where he had realized Pixie's feelings for him, and the two began dating, and later married.

Gary began his television career with his hit educational science program, "Gary Nye the Gadget Guy", which began in 2005 and ended rather abruptly in 2011, after he accidentally burned down the studio where it was filmed.

In 2015 he had a minor role on Happy Herbert's Hellish Adventures where he portrayed an evil scientist named Joe.

Also in 2015, Gary starred as The Doctor in the BAC series, Doctor Wat, which is currently on hiatus for an undefined amount of time.

In 2016, Gary hosted a science fiction series known as The G-Files, which featured him investigating some of the PSA's more unusual cases. The show met with mostly negative reviews, and was cancelled after only one season.

In 2018, he stared in the film adaption of his unpopular "romamce" novel 50 Shades of Gary: 50 Shades Garyer, where he played Gary Garrison, a young man who develops an intimate relationship with an interdimensional clone of himself. The film is looked down upon by critics, who believe it portrays an abusive relationship, and unrealistic expectations of interdimensional clones. 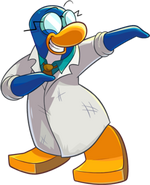 Add a photo to this gallery
Retrieved from "https://pixies-secret-agency-psa.fandom.com/wiki/Gary_the_Gadget_Guy?oldid=73923"
Community content is available under CC-BY-SA unless otherwise noted.