A complete list of all puffles under the ownership of Gracie.

Blitzen is Gracie's favourite deer puffle and assistant in Over the Rainbow with Snickers the Turtle. He helps her by digging up clues on how to get over the rainbow and exploring Club Penguin with her. He is an expert digger, always seeming to dig up the best stuff compared to other puffles. He can't talk, but Gracie can still understand him most of the time.

When he isn't helping his owner, he is helping the PSA in the Puffle Division.

Blitzen is very generous and puts other puffles' needs before his. He shows complete obedience for Gracie, and never gets in trouble. He'll do whatever it takes to help her get over the rainbow and discover who Snickers is. He loves to dig and explore, getting super excited when he discovers something.

Boomer is the male dog puffle of Gracie. He likes to dig up things and playfully chase around Luna, which she doesn't mind.

He is a recurring character on Over the Rainbow with Snickers the Turtle, showing great interest in digging up things, but not to get over the rainbow.

He is loyal and playful. He is very energetic when it comes to play time, never seeming to get out of breath when chasing Luna. He'll always stick to Gracie's side even in the toughest moments, as shown in Over the Rainbow with Snickers the Turtle.

Rthyin is the only dragon puffle of Gracie. He thinks Inferno as a father. He isn't in the PSA because he believes other things are more important (not that he doesn't care about the forces of evil attacking Club Penguin).

He is happy-go-lucky and cheerful. He can be a bit clumsy when flying.

Darktwist is Gracie's first unicorn puffle that loves Twizzlers. His best friend is Starburst which he acts like a bigger brother to. He helps the PSA sometimes.

He thinks he's superior to all puffles, making him pretentious and arrogant. Starburst often tries to persuade him not to be. He also doesn't like any brightly colored things, such as Cadence, who he thinks is too pink and a huge nut.

Starburst, AKA Starsplitter Squeaker, is Gracie's second unicorn puffle whom is obsessed with O-berries. Her best friend is Darktwist which she finds like a brother. She helps the PSA by Gracie's side. She got her nickname, because when she squeaks, everyone thinks it was a super nova.

Unlike most white puffles, she is energetic and crazy. She loves to eat O-berries and play with Darktwist. Her squeaks are really loud, to which she uses to help the PSA. 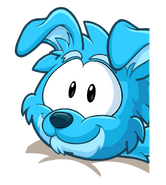 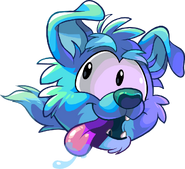 Add a photo to this gallery
Retrieved from "https://pixies-secret-agency-psa.fandom.com/wiki/Gracie_Watson_Somerville/Puffles?oldid=71016"
Community content is available under CC-BY-SA unless otherwise noted.