Jimmy was born to Tusk and an unnamed walrus somewhere in Canada. Tusk left the day after Jimmy was born, so Jimmy never knew the existence of his father until his mother told him about his father when Jimmy was around 5. His mother named him William, and took care of him for about 10 years before supposedly being killed by a polar bear. Jimmy was left wandering Canada on his own for a few weeks, until he saw six Blue Crystal Puffles flying through the sky. He followed them to the North Pole.

The Puffles said he was chosen to be the Merry Walrus, and give presents to the people of the world on Merry Walrus. Jimmy thought they must be mistaken, but they knew they weren't mistaking anything. Jimmy has since taken the role of being the Merry Walrus, although he keeps it a secret from anyone he meets, including his close friends.

When Jimmy turned 17, he moved to London, England to study acting. He decided to go by the stage name "Jimmy Honey," because he didn't really like his full name and wanted to be someone new. He got his first movie role two years later in 2008, in Luck of the Irish. He acted alongside Gracie, where he met her. The two have since remained good friends.

When Tusk invaded Club Penguin, Jimmy was certain this walrus was his father. He had never seen him in person, but he remembered from his mother's description that this was his father. Jimmy never got the chance to face Tusk about his theory, and really didn't want to out of fear that he was over thinking things.

Jimmy has continued acting and fulfilling his duty as the Merry Walrus. He will also sometimes go to Club Penguin to help Gracie and the PSA, but he isn't an official agent.

Jimmy is soft-spoken, polite, and sarcastic. He's what could be called a gentle giant, appearing big and somewhat intimidating, but he's actually just a nice guy who likes puppies and sunshine. He's often nervous and always tries to convince Gracie out of her bad ideas while looking completely petrified, usually profoundly sweating. He has a bad habit of drinking too much coffee before going to bed, and has completed many all-nighters.

As the Merry Walrus, his personality changes almost completely. He's very confident and likes to inspire others to make others happy. He's still sarcastic and quirky, but appears older and more mature than he actually is.

Jimmy is completely asexual, and doesn't like people asking about his sexuality on television. However, he may still feel some sort of romantic attraction, but exclusively to walruses. This is still very rare, though. He is like a brother to Gracie and Tim, viewing them as his own family since he never really had one. 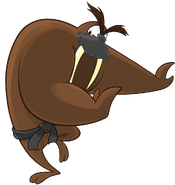 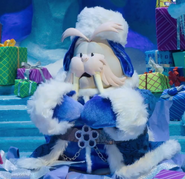 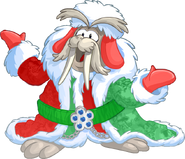 Jimmy at the Holiday Party 2015

His signature
Add a photo to this gallery
Retrieved from "https://pixies-secret-agency-psa.fandom.com/wiki/Jimmy?oldid=75476"
Community content is available under CC-BY-SA unless otherwise noted.