Lola is a penguin that lives on Innocent Island. She was the girlfriend of Rafael.

Lola still lives on Innocent Island, taking care of Lotus, Rafe's blue puffle, after Rafael moved to Club Penguin. She has a talent of brewing potions, and has dreamed of being Gary's assistant. She also has two white puffles, which one has  been turned ito a Unicorn puffle and the other one into a Chicken puffle. Their names are Magical and White. She also has a sister, Angie, who is a surfer-in-progress.

Magical is a Unicorn Puffle. Magical is capable of teleporting in and out of locations. Once, she even teleported into Gary's house!

White is a Chicken Puffle. White is beginning to fly and can sneeze magic dust that is used for Lola's potions. Other than that, White plays with Angie. 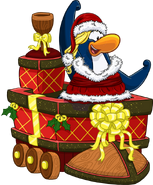 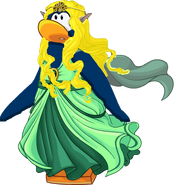 Lola during a formal event

Lola during the winter
Add a photo to this gallery
Retrieved from "https://pixies-secret-agency-psa.fandom.com/wiki/Lola_Swimsurf?oldid=74853"
Community content is available under CC-BY-SA unless otherwise noted.