Lucas "Gizzy" Lilac Evergreen (Gizzo, or his code name GTPP or LTPP) is a member of the PSA and the creator of all the parties at the PSA. He never fully revealed himself until the Halloween Party 2015 where he was giving quests near the end of party. He'll often help Gary with inventions, or work on his own.

Lucas enjoys parties very much. While his brother Tra is very wild and crazy, Lucas is a bit calmer and tends to get annoyed with Tra.

Lucas and Myles were separated when Myles was born. When their parents left Myles's egg, they decided one child was enough so they left Myles. Lucas, who was only 1 year old, had no idea he had a brother until the age of 10. They told him that he had a brother who they left many years ago. They didn't even know if Myles was alive or not. Lucas, who was then furious with his parents, left on a journey to find him. After searching for a while, he reached Club Penguin and he found a mysterious HQ. He entered it to find Myles there. Now Lucas plans the parties on Club Penguin and has a fancy nickname, Gizzy while secretly working for the PSA. 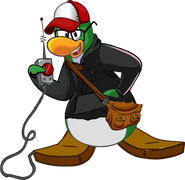 Gizzy's old outfit
Add a photo to this gallery
Retrieved from "https://pixies-secret-agency-psa.fandom.com/wiki/Lucas_the_Party_Planner?oldid=75453"
Community content is available under CC-BY-SA unless otherwise noted.