Lucy Crystal is Locy's sister. She is incredibly feminine and dresses in lolita fasions. She often takes a peaceful approach to situations and tries to reason with enemies. She tends to find an upside to every person.

Lucy is a great singer, having preformed at the fair and the talent show. She can be very defensive of Locy. She tends to scratch herself when she gets nervous. She is usually shy, and she's not very strong or assertive. She also has low self-esteem. She is a lesbian.

Lucy and Locy grew up together for most of their lives. However Lucy wanted to explore beyond Club Penguin therefore separating them. She ended up on the magical island of Blisk. There, she discovered magical gems that have a number of different powers. She also took a job at the Dragon Fire Café and discovered she had a great singing voice. After staying on Blisk for six months she mastered the power gems and knew everything about dragons. However, she could barely survive the harsh conditions of Blisk due to how delicate she is. She decided to go back to Club Penguin where she currently resides.

Lucy used to have a set of gems that would give her and the other agents powers, but they have lost their power, likely because the wizard who formed them wasn't very powerful, leaving Charlie's Snow Gem as the only one that still has power. It wasn't until she visited Blisk during Operation: Freeze that she fell into the volcano and discovered her Phoenix Queen form. However, she cannot control when she transforms. 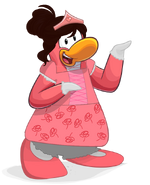 Lucy's hime (princess) lolita clothes
Add a photo to this gallery
Retrieved from "https://pixies-secret-agency-psa.fandom.com/wiki/Lucy?oldid=69804"
Community content is available under CC-BY-SA unless otherwise noted.