Melissa Elena Sullivan, also known as Mel or Lissa, is a duck who used to live on Club Ducky, but moved to Club Penguin in August 2016. She's had a serious crush on ADL since first sight, and has wanted to marry him ever since she learned what marriage is. In August 2016 she moved to Club Penguin to be near him. They met while he was still on Club Ducky. She currently lives in an igloo next to Amanda's, and every now and then keeps her and her family awake due to Melissa's yelling/screaming, and Amanda or Cristina often have to go tell her to quiet down. Once, Melissa cried very loudly after Amanda told her to quiet down, and wouldn't stop, so Amanda got the police involved.

Melissa is the stereotypical teenage girl, obsessed with texting, selfies, shopping, clothes, popularity, etc. Often times, she'll faint if she sees an outfit she really likes, and she usually smells strongly of perfume. She is pretty crazy when it comes to ADL. She likes songs, especially those she can easily relate to ADL. She is a fan of Cadence, who is one of her favorite artists. She also tends to yell or scream instead of talk, and is pretty much a spoiled brat. She has a deep hatred for her sister, and loves to bother her. She gets really mad if you call her by her initials, MS, since MS is a disease. She hates when her skin gets dry from perfume.

Due to her energetic personality, she was not very popular at her school in Club Ducky, and disliked school because of this. She often skipped school to go to malls instead, and therefore failed 11th grade, but didn't care, since she temporarily dropped out. In September 2016, she decided to go to Club Penguin University. She's also a very good singer, and now loves school, since she's extremely popular at CPU for her singing performance at the September 2016 talent show.

She really likes her agency, Melissa's Revenge, that she and Megan formed to get revenge on SASS for kicking Melissa out. Valencia joined in November 2016, and after becoming best friends with Melissa, she was made co-leader. Melissa is an excellent swimmer, since she has been on the swim team since middle school and had an after-school swimming class from 6th to 8th grade, and also from natural ability, being a duck. She often brags about her ability to swim, much to the annoyance of her friends and others.

Melissa and her twin Melodi were born on January 26, 2000 on Club Ducky Island to a family of rich ducks, and they have been spoiled their whole lives. Since their family had so much money, they often spent much of the girls' time off school doing things like going to amusement parks or visiting foreign lands. As children, their family was invited to meet ADL and his family at their castle. Melissa's had a crazy crush on him ever since. The twins always went to private schools, and in middle school Melissa took an interest in swimming, which she still has. She joined the swim team every year in middle and high school, and also joined an after-school swim class in 6th grade, which she graduated from at the top of the class at the end of 8th grade.

She's visited Club Penguin Island before, looking for her crush, and always failed to find him. But on her last visit she did find SASS, and was interested in joining. In August 2016 she moved to Club Penguin to be closer to ADL, and escape her parents' and Melodi's wrath towards her for failing 11th grade, skipping school, and dropping out. When she moved to Club Penguin, she joined SASS, and really enjoyed the agency. However, she got fired from SASS in late August 2016, because they didn't think she was mean enough to be a member. She formed her own agency named Melissa's Revenge, and since Megan has become somewhat nicer, she also left SASS to join.

Now that Melissa lives on Club Penguin, she wants to build the biggest mall known to man. In September 2016 she changed her mind about dropping out of school, and restarted 11th grade at Club Penguin University. She sang her favorite song for the September 2016 talent show at CPU, and since she sang so well, she's now the most popular student there, and now really enjoys school. 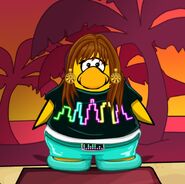 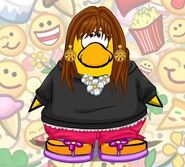 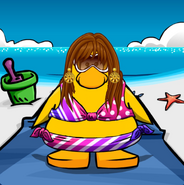 Melissa at the beach

Melissa when she was 8

A picture of Melissa from Amanda47's DeviantArt
Add a photo to this gallery
Retrieved from "https://pixies-secret-agency-psa.fandom.com/wiki/Melissa?oldid=74521"
Community content is available under CC-BY-SA unless otherwise noted.