Paul is Locy's pet pineapple. He is known by many for his role in Charlie's freestyle comic series, The Awful, Ridiculous, Uninteresting F***ing Adventures of Paul Teh Pineapple.

One day Charlie was bored, so Pixie jokingly suggested that he draw a face on a pineapple. Little did she know that Charlie had taken her seriously. He stole a pineapple from a nearby grocery store and drew a face on it using a black marker, causing it to inexplicably come to life. He later gave it to Locy as a present.

Due to his lack of a brain, Paul isn't the smartest talking piece of fruit out there, but what he lacks in intelligence, he makes up for in kindness. By default, Paul is very kind to everyone around him, and it takes a lot to push him over the edge. 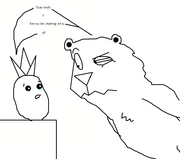 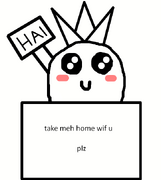 Adopted by Locy
Add a photo to this gallery
Retrieved from "https://pixies-secret-agency-psa.fandom.com/wiki/Paul?oldid=74876"
Community content is available under CC-BY-SA unless otherwise noted.