Rookie is Pixie's cousin and an agent of the the PSA. He was originally not very smart due to a tragic lack of education, but thanks to one of Gary's inventions he now has average intelligence. Rookie owns 2 pets: Rocky, his pet rock; and Quack Quackington, his rubber duck.

Prior to becoming the way he is today, Rookie was very clumsy and idiotic, but mostly annoying, doing stuff such as following Gary around just to ask stupid questions, always using Puffles' bathroom instead of his own, and eating ADL's pie. This, plus his crush on Locy, made him a nuisance to most of the agency.

Rookie is known for being a very clumsy and idiotic agent, despite having average intelligence. He is a friendly agent, going as far as to act stupidly to make others laugh. Because of this, many still underestimate his intelligence. Rookie no longer has a crush on Locy, and has found his fiance, Elsa. Many agents find him less annoying than he was before, as he stopped doing many of the annoying things he did before.

After accidentally setting fire in the Plaza, Rookie was fired from the PSA. Determined to help his friend, Charlie programmed Gizmo to give him an intelligence boost. This was successful, and Rookie instantly became the smartest penguin on the island. However, he quickly realized that Locy and Lucy didn't like him as much, as they thought that Rookie no longer had his affection for Locy due to a misunderstanding. Eventually, Rookie realized that he didn't enjoy being smart anymore, so he used one of Gary's inventions to make him stupid again. However, the machine malfunctioned and Rookie found out that he now has the intelligence of a normal penguin. Many months later on an important mission, a portal gun malfunction split Rookie and his smartness into two identical penguins. It was discovered that Rookie's smart half had a mind of his own, and prefers to be called Albert after the famous (human) scientist.

In June of 2014, he met and fell in love with Elsa, who he married. However, she filed for a divorce after he called for animal control to have Sven be put down. As revenge, Rookie eloped with Herberta G. Bear. 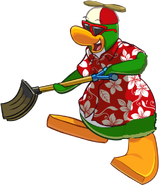 Add a photo to this gallery
Retrieved from "https://pixies-secret-agency-psa.fandom.com/wiki/Rookie?oldid=74201"
Community content is available under CC-BY-SA unless otherwise noted.