Sensei Sensei is a secret PSA agent, the husband of Aunt Arctic, and a ninja that first appeared digging out the Dojo in November 2008, when it got hit and damaged by lightning, claiming to have returned from "a long journey" in the wilderness of Club Penguin. He is an old penguin, and a master of all elements. He has a childhood best-friend named Tusk (a walrus), who is his bitter rival. Sensei uses a broken tusk from this rival as his walking stick.

When Budder Ninja proposed Card Jitsu Butter to him, he laughed and rejected the idea, claiming nobody would ever benefit from the powers of butter. This made Budder Ninja mad, so he used his powers for evil and hated Sensei, joining the RPF.

Sensei is a calm, wise penguin whose main interests are writing haikus, which he'll usually use in everyday speech, and training penguins in the arts of Card Jitsu. 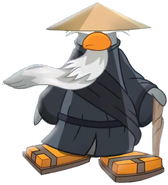 Add a photo to this gallery
Retrieved from "https://pixies-secret-agency-psa.fandom.com/wiki/Sensei?oldid=74653"
Community content is available under CC-BY-SA unless otherwise noted.