Stacey is a construction worker on Club Penguin and a PSA agent. She made her debut in Same Love.

Stacey was born on Club Penguin island on April 13th. She was well-cared for by her parents, being the oldest of three children. She was always good at building things, and took pleasure in it.

Stacey became a construction worker at 22. She helped in rebuilding and repainting the stage, where she first saw Rory. They later properly met when they were both assigned to help in designing the Hollywood Party.

Stacey, Rory, and Cuttin' Edge became close during their work on designing the party, and remain good friends to this day. Sometime before the events of Same Love, Stacey met an artist named Derek and started dating him, but they broke up sometime after the events.

Gracie introduced Stacey to the PSA when she thought her Card-Jitsu skills might be useful in the agency. Stacey soon joined, using her ninja skills to help them out.

During the construction of the Dance Club for a party, Stacey met Barry. After talking for a while, they agreed to meet up again at the Pizza Parlour. They exchanged numbers afterwards. A few days passed, and they later crossed paths again at Dylan and Kate's wedding. They continue to date for several months, both of them meeting each other's families. Barry proposed to Stacey in the Forest, and she said yes. They got married the following spring.

Whilst she attended Sherbert's Birth, her husband did not.

Stacey is an extroverted and cheerful penguin. She enjoys hanging out with her friends and being a construction worker. She's also extremely helpful, always up to help any of her co-workers. She's shining with confidence most of the time, but has difficulties believing in herself when she keeps messing up. She prefers group work over independent work. She can also be sneaky and quiet, being a ninja.

Stacey is an arctic white penguin with long dirty blonde hair that is parted in the middle. Her hair is usually in two braids, or left down. She is 3' 4.5" (106 cm) and 5' 4.5" (167 cm) in human form. She wears the standard construction worker outfit at work, but her casual attire is a short purple dress with her black belt in Card-Jitsu. When she went to dinner with Rory in Same Love, she wore a white t-shirt with a mid-length red skirt and yellow pumps. 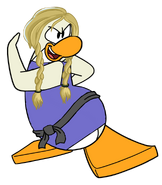 Add a photo to this gallery
Retrieved from "https://pixies-secret-agency-psa.fandom.com/wiki/Stacey?oldid=74924"
Community content is available under CC-BY-SA unless otherwise noted.