Waffle Stompin' Bob (more commonly known as Stompin' Bob) works for the the PSA, but not many people know about it. He also works as a musician and performs at various places throughout the years with the Penguin Band, as the lead bassist. He, Franky, G Billy, and Petey K formed the Penguin Band. But after Franky's tragic death, the band disbanded. Before Franky's death, ADL killed Bob, but Kris and Riley were quick to revive him for an unknown cause.

He used to have a crush on Cadence, making him jealous of Franky and Kris, who were close friends with her and dated her, respectively. He no longer retains feelings for her. He also dated Pixie once, but it only lasted for two days. He also seemed to like Paige at one point, but her husband and brother convinced him she would never like him back.

Stompin' Bob and his guitar.

Him and the Penguin Band. 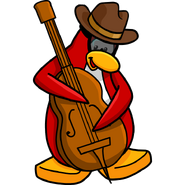 Stompin' Bob's old look
Add a photo to this gallery
Retrieved from "https://pixies-secret-agency-psa.fandom.com/wiki/Stompin%27_Bob?oldid=74659"
Community content is available under CC-BY-SA unless otherwise noted.