Juan Rodriguez, more commonly known as the Taco Vendor, is a character that randomly appears in Roleplays. His main occupation is selling tacos, although he also secretly served as the Director of the PSA from its founding in 2013, until late 2020.

Juan Rodriguez lived on an island near Blisk for most of his life until he illegally immigrated to Club Penguin. He is now an ally to the PSA, although he sometimes has an antagonistic side. He is regarded as a minor nuisance to most PSA Agents. His first appearance was in this thread.

In 2020, at Sherbert's Birth, it was revealed that he was actually the real Director all along, and that Pixie was only covering for him, as his immigration status interfered with his ability to legally own and run a business in Club Penguin. This front was no longer needed however, as he managed to gain citizenship in October of 2020, and he was finally able to go public about his involvement with the agency.

Unfortunately, the authorities didn't take kindly to the fact that the PSA had technically been run illegally since 2013, and he was promptly arrested, leaving Pixie to once again take up the position of Director.

Juan Rodriguez is a stereotypical illegal Mexican immigrant. While speaking, he will use Spanish words mixed in with English words. He will sometimes take a nap while working. This has been revealed to be a fake persona he puts on for his taco selling business. 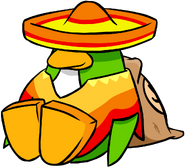 Him taking una siesta.
Add a photo to this gallery
Retrieved from "https://pixies-secret-agency-psa.fandom.com/wiki/Taco_Vendor?oldid=75338"
Community content is available under CC-BY-SA unless otherwise noted.