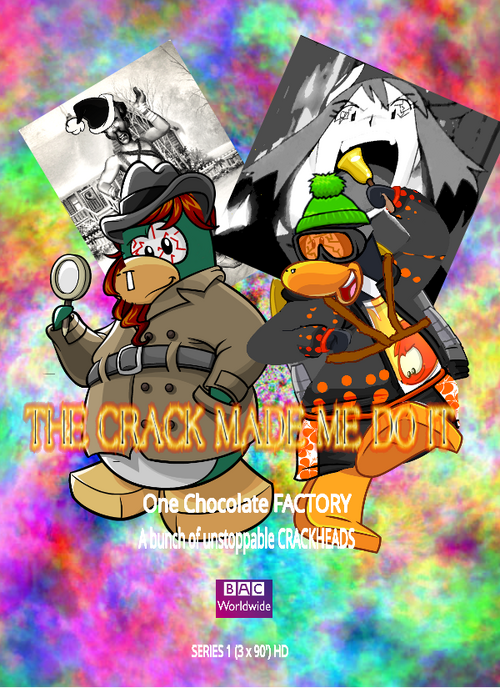 The Crack Made Me Do It is a British/American comedy action television series created by Gracie Somerville. It is the most well-known show on BAC. It's currently on hiatus.

After Gracie discovered she could bring crack out from her Mind Palace, she started selling it in the Chocolate Factory. She soon formed a group called the Crackheads. They live in a hole in the ground, called the Crack Pit. It is always Christmas to the crackheads, as Barnes always thinks he is Santa and gives out gifts everyday. Gracie keeps giving John the ugly jumper for Christmas even though he already owns it. But when some of the factory workers don't like drugs in their factory, the Crackheads break into a war with them.

Gracie: The captain of the Crackheads and the founder. She expects the best from her Crackheads, and no one dares to cross her.

Barnes: The co-captain who specializes in making explosive crack. Very obedient to Gracie.

Helmet: Joined the Crackheads after Gracie sent him an invite, the two being friends. He may be the calmest and most quiet-spoken out of them all.

May: A Pokémon trainer who found her way to the penguin world accidentally. When she's exposed to crack, she becomes uncontrollable and crazy.

John Watson: The unofficial treasurer. He is the least obsessed with crack out of all the Crackheads. When Gracie is too high to think straight, John's there to make sure the Crackheads don't kill each other.

Wave Panda: A young penguin who makes sure to speak his mind and help out.

Amanda: The newest addition to the Crackheads. Gracie and John find her while they are wandering around, trying to recollect all their lost members.

Charlie: The owner and boss. He despises the Crackheads, wishing them out of his factory and dead.

Blue Jay: The co-owner. He dislikes the Crackheads, but not as much as Charlie.

Pixie: Used to be a loyal Chocolate Factory worker that rejected any crack offers, until she began to give into the deals, leading to her quitting her job as her boss was against crack.

ADL: A loyal employee who follows the crackheads around, trying to undermine them.

Characters that only make an appearance in the show in the Crackheads' hallucinations and/or thoughts.

Poko: The 5999 year old dragon that lives on top of Misery Mountain, helping the Crackheads with his excellent chemistry; he speaks with a strong Scottish accent, forming rhyming couplets with all his sentences. It is hinted that he may have some future-seeing powers.

Gary: Gracie's scientist uncle. He sometimes makes cocaine, even though the Crackheads don't usually experiment with it. He helps them with selling in the Chocolate factory and not getting caught. He works with Poko often.

Jimmy: Gracie's walrus friend. He doesn't do crack as he is a "goody-goody," but he isn't against the Crackheads. Since he is huge compared to the penguins, he'll randomly appear in escape scenes or parkour scenes as a stand or obstacle. However, these moments may just be hallucinations by the Crackheads.

Sherlock Holmes: John Watson's flatmate and best friend. He sometimes gets mistaken as John's boyfriend, but he never corrects anyone to do so. He'll walk into the Crack Pit when the Crackheads are bored and give them an experiment to do, or crimes to solve. Even if they aren't drug-related, they still succeed at doing them.

Lucy and Locy: Princesses the Crackheads are afraid of. They've heard of what they might do to punish them if they ever find out about them.

2. The Struggle for Existence

5. The Penguin Who Knew Too Much

Retrieved from "https://pixies-secret-agency-psa.fandom.com/wiki/The_Crack_Made_Me_Do_It?oldid=73605"
Community content is available under CC-BY-SA unless otherwise noted.