The Doctor is a time lord from Gallifrey who helped Gary the Gadget Guy make his invention, the Time Trekker, travel more smoothly. He is secretly friends with the PSA and helps them defeat evil with his time travelling TARDIS. He is also secretly close to Sherlock, helping him figure out some cases.

During the Doctor's travels in the Lands Beyond, he met Tock the Watchfox. After he resigned as a Watchfox, he was given to Gracie who renamed him to "Kippy."

The Doctor currently travels with Helmet, Jay, Pixie and Gracie.

He is a founding member of the band Aliens & Stuff, which he chose the name for.

The Doctor is enthusiastic, charismatic, bright, and hyperactive, often at inappropriate times. Although, he's serious and demanding when a situation needed it. He's very cheeky, witty, and light-hearted, but nurses profound anger, regret, and vulnerability beneath his glib exterior.

Loneliness is his most persistent personal demon: His relationship with various companions is always short-lived and often ends in tragedy. The survivor's guilt of his previous incarnation now takes the form of extreme isolation and a sense of melancholy at being the last of his kind.

The Doctor about to battle some daleks.

The Doctor with his TARDIS. 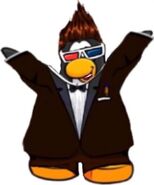 The Doctor playing a bass guitar
Add a photo to this gallery
Retrieved from "https://pixies-secret-agency-psa.fandom.com/wiki/The_Doctor?oldid=72877"
Community content is available under CC-BY-SA unless otherwise noted.