The Illuminati Takeover is a PSA Wiki event that took place in May 2015.

After denying their existence, ADL is captured by the Illuminati, who has finally come out of hiding and has decided to take over Club Penguin and hypnotize children around the world into worshiping the all-seeing eye. After two days a large moon appears in the sky, put their by the Illuminati that threatens those who appose them. Charlie and Locy, Club Penguin's resident Illuminati conspirators decide to lead an attack against the Illuminati, avoiding their mind control with tin-foil hats ADL left behind before he was kidnapped. Players must complete quests to breach the Illuminati's impenetrable firewalls to find out where ADL is being held before it's too late. ADL, having seen too much, is not allowed by the Illuminati to leave, as spending time with them has granted him the knowledge of how to destroy them once and for all. After defeating the highest-ranking members of the Illuminati, with ADL's help the player must face off with Rocky, the Illuminati's double agent, and choose whether to destroy him or turn him against the Illuminati and destroy it for good. After defeating the Illuminati the player is awarded with ADL's Tin Foil Giveaway, The Moon Costume, and the "All-Seeing Eye" pin. During the party, Charlie, Locy, and a hypnotized Rookie (walking Rocky like a puffle) will be handing out their respective backgrounds. 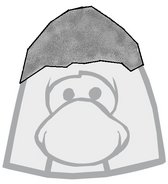 The Tin Foil Hat
Add a photo to this gallery

Retrieved from "https://pixies-secret-agency-psa.fandom.com/wiki/The_Illuminati_Takeover?oldid=57783"
Community content is available under CC-BY-SA unless otherwise noted.