The PSA is Pixie's Secret Agency, and owned by The Director. The agency is more top secret than the EPF.

The Puffle Division (also called the Puffle Secret Agency) is a group of puffles led by Agent Charlie who work for the PSA.

The PSA's worst enemies are Herbert P. Bear and Douglas. Other enemies include, Klutzy the Crab, Protobot, Tusk, The RPF, Herberta G. Bear, S.A.S.S., and LOVE. 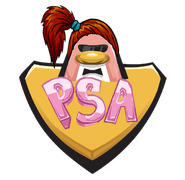 The badge each member receives when becoming an agent.
Add a photo to this gallery
Retrieved from "https://pixies-secret-agency-psa.fandom.com/wiki/The_PSA?oldid=68852"
Community content is available under CC-BY-SA unless otherwise noted.