The Shamrock Queen was a pirate who attacked Club Penguin during The Shamrock War of St. Patrick's Day.

The Shamrock Queen has little regard for anyone else's feelings, and absolutely hates being corrected. If someone disagrees with her, she will most likely hypnotize them to do what she wants. She completely dislikes tests of any kind, and snakes.

During the Shamrock War of St. Patrick's Day, The Shamrock Queen attacked Club Penguin with an army of Frost Bites she hypnotized, after stealing the Migrator from Rockhopper. Her intent was to capture the PSA, and rename it to the SPSA. She was defeated when St. Patrick appeared, and scared her away with some snakes. She has not been spotted since.

The Shamrock Queen has the power to hypnotize others with a green ray. Those who are hypnotized will turn the color green. 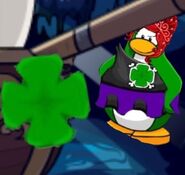 Her playercard during The Shamrock War of St. Patrick's Day 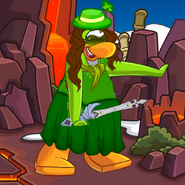 An unused Playercard of hers
Add a photo to this gallery
Retrieved from "https://pixies-secret-agency-psa.fandom.com/wiki/The_Shamrock_Queen?oldid=75294"
Community content is available under CC-BY-SA unless otherwise noted.