Ultimate Proto-Bot 10000, also known as Protobot and UP10K, is an enemy of the PSA and EPF.

Protobot was created by the bots in 2008. Between then and now, it has been destroyed, and rebuilt several times, going through several redesigns. Among these were several attacks on the EPF, with UP10K demanding control over the island. It now controls the bots that created it, along with other bot minions it had created. It was defeated during the Future Party in 2014, but it is rumored to have been rebuilt. 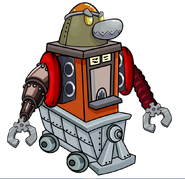 Add a photo to this gallery
Retrieved from "https://pixies-secret-agency-psa.fandom.com/wiki/Ultimate_Proto-Bot_10000?oldid=74622"
Community content is available under CC-BY-SA unless otherwise noted.