Zelda Garianna Somerville is the daughter of Gary and Pixie. She was named after Princess Zelda from The Legend of Zelda series, and an ancestor of Gary's. She is best friends with Ava and Jewel.

Zelda is very mature for her age, being able to speak perfectly. This is due to her being exposed to a strange chemical in Gary's lab that made her mature at a rapid rate.

She is usually quite calm, but her mood can change in the blink of an eye, and she has been known to become incredibly violent in times of danger.

When Zelda was just over a year old, her father was supposed to be watching her while he was working in his lab, but he left the room for a few minutes, (likely to get more coffee) and returned to find Zelda drinking out of a beaker full of an unknown substance. Due to this, she has matured at a rapid rate, and currently has an IQ similar to that of her father. A few months after this incident, a group of Minions invaded the island, and while her parents were distracted, Zelda slipped out of her playpen and annihilated several of the Minions using Link's sword.

She is currently attending Little Flippers Preschool, although her teachers have suggested that she be moved to a higher grade. While Gary believes his daughter is already ready for college, Pixie has decided that it would be best to keep her with children her own age in the hope that she will make new friends.

Zelda in her father's office 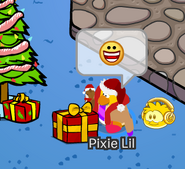 Zelda with a candy cane
Add a photo to this gallery
Retrieved from "https://pixies-secret-agency-psa.fandom.com/wiki/Zelda?oldid=74125"
Community content is available under CC-BY-SA unless otherwise noted.